0071 - Hieromonk Stephanos The Photographer of The Holy Cell of St. Thomas Karies 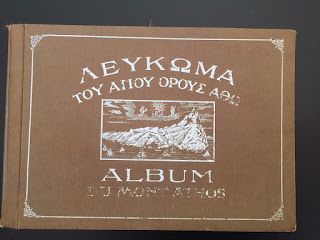 In continuation of my series of posts relating to a rare book on Mount Athos by Hieromonk Stephanos, Greek - ΛΕΥΚΩΜΑ ΤΟΥ ΑΓΙΟΥ ΟΡΟΥΣ ΑΘΩ, french - ALBUM DU MONT - ATHOS, we will explore the author and his biography. 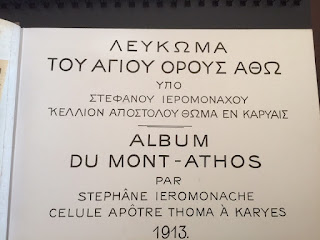 Upon conducting an extensive search of the web in Greek and English regarding Hieromonk Stephanos, I could not find many sources, however I did manage to find a short biography and other short references to him which I will collate below: 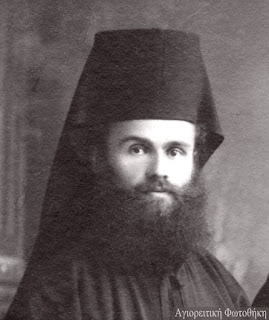 The Hieromonk Stephanos, worldly name Stergios Lampropoulos, was from the village Rodovistsa in the province of Tsotiliou in the state of Kozani. He was born in 1885 and was tonsured a monk in 1903 at the Cell of St. Thomas of Fr Serapheim in Karies, Mount Athos. 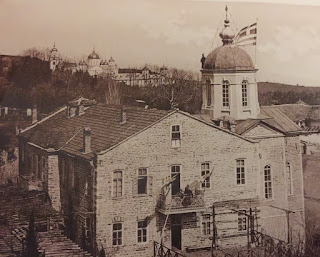 In 1906 - 1907 he founded, along with Panagiotis Stournaras, the Photographic workshop "Athos", and eventually maintained on his own after 1912. The workshop was located in the yard of the Cell.
He was also the official photographer of the Holy Epistasia (Governing Body), of Mount Athos.
He publicised the well renowned and above pictured book, containing a series of pictures of Mount Athos (1913-1928) and a series of post cards.
A close co-worker of his was the Hieromonk Vasilios.

In 1928 the above-mentioned book was published in Magdemburg with its famous and impressive photos of Monasteries, Sketes, Towers, Boat houses, Phiales and other treasures of Mount Athos.
The book also contains a photo of his cell of which only the church remains to this day.

The book was republished in 1986 by the publishing house Malliari, along with three photographs from the book/album Griechenland (Berlin 1928) of Hanns Holdt and Hugo Von Hofmannstahal, titled Athos within old photographs, with text and descriptions written by writer Dimitris Bambakas. 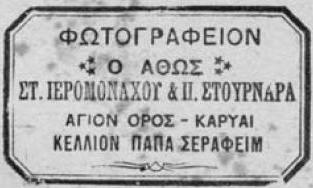 And a special thanks to "Keliotis" or Giannis Konstiotis for guiding me in the right direction.