Tonight, in the process of reading my usual blogs, I came across something very interesting. Have a look at the below photograph, taken between the years 1880 - 1890. It was taken in the Icon studio of the Holy Monastery of St. Panteleimon (Rossikon).  Wim from the blog http://athos.web-log.nl/ uploaded this picture as part of recent post regarding old photos of the Russian Monastery. 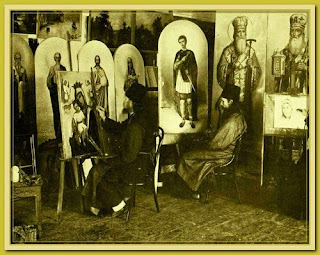 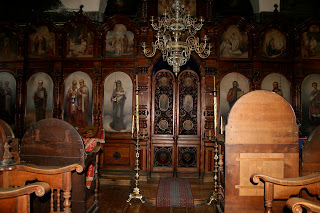 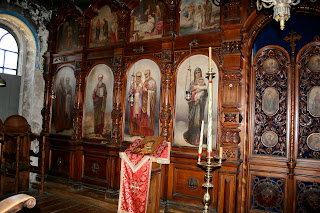 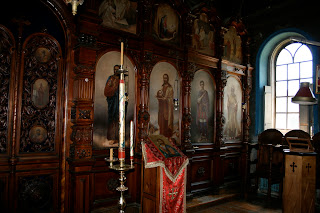 The Icons in the old photograph have an almost exact resemblance to the Icons of the chapel of the Athonias Ecclesiastical Academy (former guest wing of St. Andrews Skete).

My personal opinion is that the old picture of the Icons in progress of completion, is dated earlier than when it was actually taken. I believe the photo was taken after 1900 which ties in with the construction of the guest wing of St. Andrews Skete (1905-1916) and subsequently, the Icons were created to be placed in the chapels Templon, where they sit till this day.
The resemblance is too strong to be a coincidence.

It's amazing that we can track the life of these Icons over the centuries!!!
at November 22, 2010 No comments:

Metropolitan Nikiforos returns to Athonias after many years. As you may know from previous posts, he was a teacher and principal of the Athonias Ecclesiastical Academy, the oldest functioning academy in Greece. 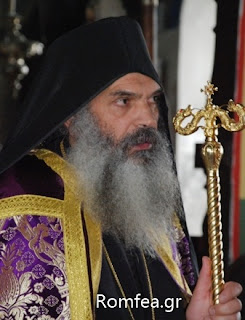 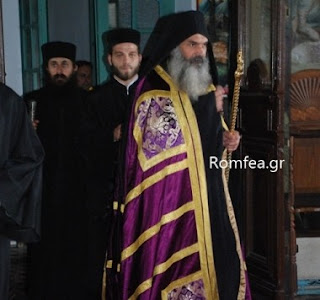 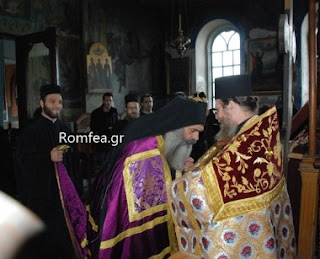 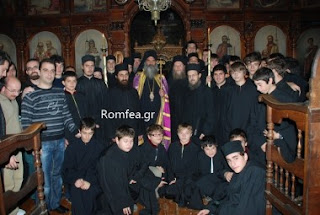 The Skete is located on the north eastern mountain side of Mount Athos, 1 hours walk from Pantokratoros Monastery and a half hour from the Skete of Prophet Elijah.

It celebrates its feast day on the 15th August, The Dormition of the Theotokos, and is caled Bogoroditsa which in Bulgarian means "The one who gave birth to God".

It belongs to the Panteleimonos Monastery (Rossikon).
The Skete is built in a valley that resembles an amphitheatre on the right hand side of a ridge which originates from the north of a forested range. This range is part of its small territory, and is also the border with Pantokratoros Monastery.

The ancient Monastery of Ksilourgou existed near the location that the Skete is built, at around 700 metres above sea level. The name Ksilourgou cam from the occupation of its founder who was named Theodosios.

Toward the end of the 19th century, the Skete had 32 monks, of which the majority were Bulgarian (25) and the rest Russian. Due to the ethnic split in the brotherhood, many disputes arose especially during this period when much of Athos was being "Russianised".
Around the Skete, around 20 ancient cells, now in ruins exist due to the Sketes idiorythmic nature pre 1800.

In the beginning of the 2oth century the new double storey building is built north of the Katholicon in the place of the old building which was demolished.

On the top floor of this building exists the most beautiful chapel of Saints Methodios and Cyrill the enlighteners of the Slavic people.

On the same floor of the adjacent wing the guest rooms are located and direclty beneath these is the kitchen and trapeza which seats 120.

The southern wing was built in 1847. On the east of the Skete, there are no buildings.

The Kyriako church or Katholikon is quite small and was built in the middle of the 18th century. To the east of the Katholiko, a chapel dedicated to Saint John of Rila is located.
At the Skete there once existed a Miraculous Icon of the Thotokos Glikofilousa. In an attempt to safe guard the Sketes treasures during the Greek Revolution all the treasures were sent to the Island of Psara for safe keeping. The island was destroyed as well as its Cathedral, were the Sketes treasures were stored.

Today a copy of the miraculous Icon exists in the Katholikon next to the bishop's throne.
Due to the many fires that the Skete was subject to, many of its original architecture no longer exists.

The majority of the Sketes bulidings are in a bad state. The chapel of Saints Cyrill and Methodius however, is maintained well.

Up untill recently, about 25 important slavic scrolls were kep at the Skete. They are now at Zografou Monastery for safe keeping.
The Skete's treasures include, a small piece of the true Cross, relics of Saints Efthimios, Ignatios and Acacios of Iveron, St. John Chrysostom, Saint Panteleimonos, Saint Barbara, Saint Theoforos, Saint Iganatios, Saint Marina, St. John of the cave, St, Gregory the Theologian, Evangelist Matthew, St. Anastasios of Persia, Saints Cyrill and Methodios, St. George the new, St. Evdokimos of Vatopediou and St John of Persia amongst others.
Today the Skete is inhabitated by very little monks.
The photos below are from the website:
http://www.myafon.ru

Once again a big thank you to our friend kelliotes for the original post in Greek.
http://agioritikesmnimes.pblogs.gr/2010/11/1673-iera-skhth-mpogoroditsa-theogennhtra-h-arhaia-monh-xyloyrgo.html
at November 11, 2010 2 comments: 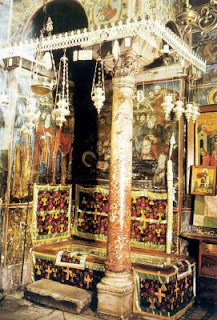 The tomb of St. Athanasios the Athonite, founder of The Holy Monastery of Megisti Lavra and organised monasticism on Mount Athos. 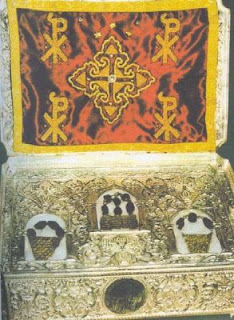 The holy gifts, given to Jesus by the three wise men in Bethlehem in their reliquary kep at the Holy Monastery of Agiou Pavlou, Mount Athos. 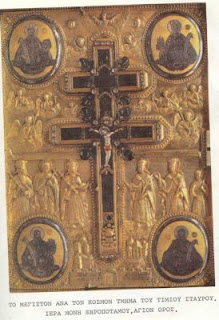 The largest piece of the Holy true Cross in the world, kept at the Holy Monastery of Xiropotamou, Mount Athos. 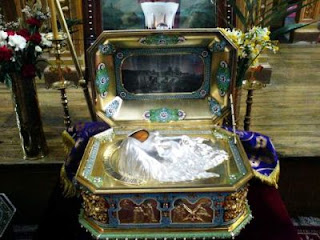 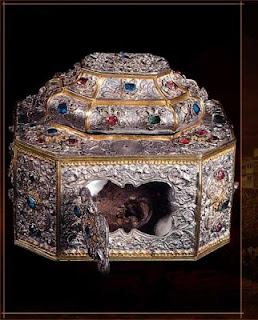 The Holy Skull of St. John Chrysostom, with his ear still intact. It is said that his ear has remained incorrupt because an Angel of the Lord would whisper into this ear whilst he was writing his numerous works. It is kept at the Holy Monastery of Vatopediou, Mount Athos. 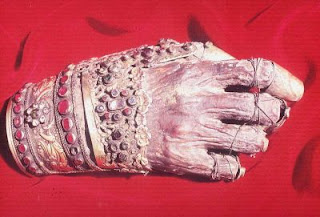 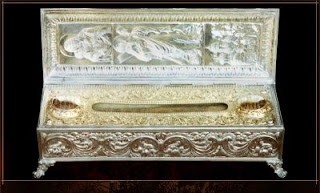 The Holy right arm of St. Andrew the first called Apostle, kept at the Holy Monastery of Vatopediou, Mount Athos. 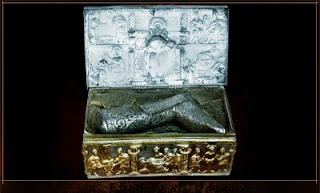 The Holy leg of St. Panteleimon, kept at the Holy Monastery of Vatopediou, Mount Athos. 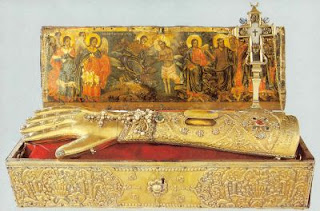 The Holy right hand of St. John the Baptist, kept at The Holy Monastery of Dionysiou, Mount Athos.
at November 06, 2010 10 comments: