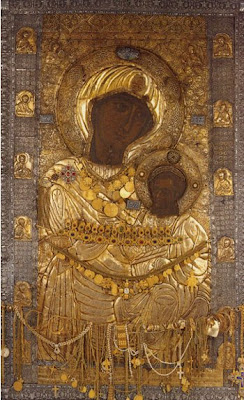 Panagia Portaitissa, as mother of the whole world unceasingly grants mercy to the pain She sees in the hearts of the troubled people that seek her help.
She speaks each persons language and understands their problems. She accepts the childlike expression of gratitude of Her children. One sees Her as merciful and uses Her presence as a balsam for his wounds. The other sees Her as a philanthropic judge, who guides him in his life.
And you will constantly see in Her image, a peaceful yet stern expression from the centuries of incense and prayers which She accepts daily, filled with love and indescribable pain from all She hears.
Her Icon is covered in a gold plated cover of Byzantine period but of plain proportions, loaded with offerings for Her assistance in sickness and gifts for Her help in achievements and healing. Archimandrite Vasilios Gontikakis - Former Abbot of The Holy Monastery of Iveron. 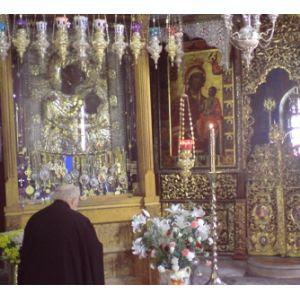 The story of the Holy Icon of Panagia Portaitissa begins in the period of Iconoclasm in the Byzantine empire. During this time, by royal edict, it was ordered that all Icons be located and destroyed as the emperor of the time was mistakenly misled to believe that the images of our Lord, the Theotokos and the Saints were a form of idolatry.
A widow in the city of Nicaea (modern day Turkey) had a beautiful and grand Icon of Panagia Eleousa (Merciful). In order to save the Icon from the iconoclasts which were destroying Icons in her city, she took the Icon to the sea and placed it in the water with a deep belief that the Icon would go to a place where it would be safe from he madness which was taking place in the empire. Immediately once she palced the Icon in the water and said a prayer, the Icon remained upright, and began travelling that way over the water and into the distance. The widow thanked God for hearing her prayers that the Icon may be saved.
Some time later, the Icon appeared just of the east coast of the peninsula of Mount Athos, where the ancient city of Kleonos was and the Monastery of Klimentos which later became the Holy Monastery of Iviron. The Icon remained upright and a bright light shone from the Icon and beamed up to the sky, as it was floating on the water, just off the coast. 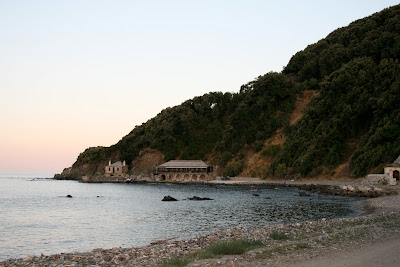 Once the monks of the Monastery seen the Icon, many of the them attempted to retrieve the Icon using their boats, however, anytime they would get close, the Icon would retreat. This continued for much time until a holy monk by the name of Gabriel saw a vision in which the Theotokos invited him to go and retrieve her Icon. The holy monk Gabriel, practised ascetisism in a cave located near the peak of small Athos, the tallest peak above the Monastery of Iviron. A cell has been built where the cave was located and it is where the former Abbot of the Monastery Father Vasilios resides today. 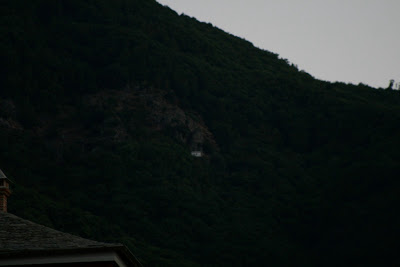 A bad photo I took at dusk of Cell of the Holy Monk Gabriel on the mountain above the Monastery. 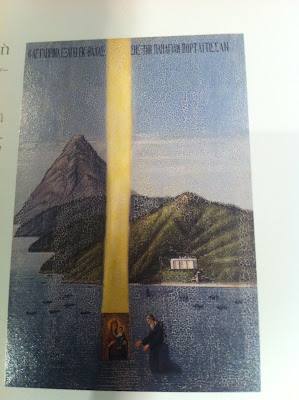 After he venerated it with much reverence and prayer, he picked it up and carried it to the coast. When he placed the Icon on a rock not far from the water, a stream of sweet water immediately came from the rock. This place exists today the stream has never ceased since that day. 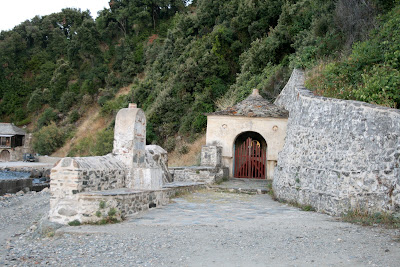 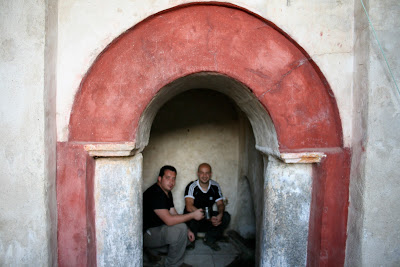 My cousin John and I, at Panagia Portaitissa's Agiasma in 2008. 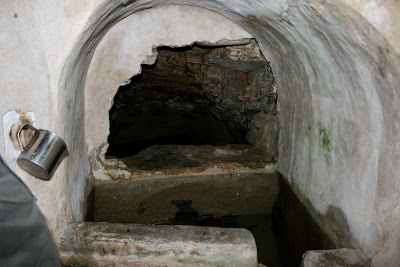 All the monks of the Monastery, with much reverence, venerated the Holy Icon and began the procession from the coast to the Catholicon of the Monastery. The monks placed the Icon in the centre of the Church. The next day, the Icon had removed itself from the Church and placed itself next to the entrance of the Monastery. This occurred three times. After the third time, the Theotokos appeared to the holy monk Gabriel and told him, "I did not come here to be protected, rather, to protect the Monastery from all evil". From that day, the Icon was placed inside a chapel which was purposely built for it adjacent to the entrance of the Monastery inside the walls. This is why the Icon was given the name Portaitissa. Porta in Greek means Door. 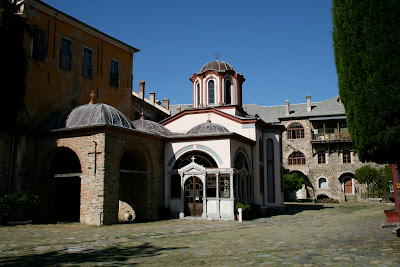 Panagia Portaitissa is considered to be the protector of all of Mount Athos and it Monasteries. Legend says that when the Holy Icon disappears from Mount Athos, the Holy Mountain will cease to be what it is today.
The Holy Icon of Panagia Portaitissa is only moved from its chapel adjacent to the entrance of the Monastery twice a year. On Bright Tuesday, the first Tuesday after Easter, and on the feast day of the Monastery, The Dormition of The Most Holy Theotokos. The Icon has never been outside of Mount Athos or the boundaries of the Monastery since it arrived.

In part 2 I will focus on the procession of the Holy Icon that takes place on Bright Tuesday.