Ouranoupolis is a village with splendid charm and character, one of my favourite places to visit and spend time in before entering Agion Oros and when coming out.
Lets look into the origins of this village in more detail. 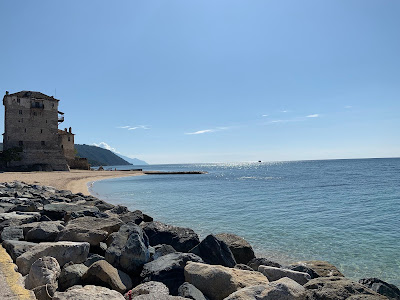 Very little is known about the ancient town of Ouranoupolis which gave it's name to the present day village.
It was certainly built around 300 B.C. by Alexarhos the brother of Macedonian king Cassandros.
The exact position of the ancient town is not known but it was certainly located on or close to the current village.
It was important enough to have struck it's own coinage. Some of these coins have been found in the area and three of them are exhibited in the British Museum.
It appears that ancient Ouranoupolis did not survive for very long. Monumental walls and possibly the remains of an ancient town have been discovered in the sea.
One Autumn in 1954 a Swedish underwater expedition believed to have found the remains of a town, stretching westwards from the foot of the tower towards the islands. They are said to have found the walls of houses with roads among them, a bridge and substantial walls under the sea in front of Ouranoupolis. 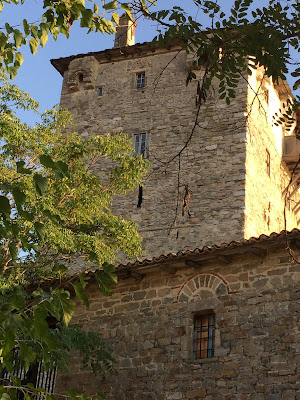 The famous tower of Ouranoupolis was built during the 14th century A.D., certainly before 1344. It was the principal building of the metohi of Prosforion which belonged to the important monastery of Vatopedi.

In May 1379 the ruler of Thessaloniki Ioannis Palaiologos stayed in the tower and issued various concessions in favour of The Vatopedi Monastery. The Emperor removed the obligation for the metohi around the tower to pay any tax and the original document is still kept at the monastery of Vatopedi.

The farm prospered and expanded, taking over all the land in the area, including that of the monastery of Zygou which had declined by then. (More on the Zygou Monastery in future posts).

The tower was used as the living quarters of the monks who were charged with the upkeep of the metohi (dependancy) until 1922.

Since the ancient times Greek populations lived not only along the coast of Asia Minor but deep inside it.
Large Greek communities lived in Constantinople and in Smyrna. Entire Greek villages existed on the Princes Islands in the Propontis and in Caesarea deep into Turkey.
Most of them kept their Greek language and their Greek Orthodox religion, living in relative prosperity in concord with the Turkish populations. That ended in 1914 when the Turkish army started large scale genocide of the Armenian and Greek populations in Turkey.
An ill fated Greek military expedition against Turkey in 1921 ended in disaster and offered an excuse to the Turks to start a systematic genocide of all the Greeks living in Turkey.
The League of Nations intervened and devised a plan to exchange the Greek populations living in Turkey with the Turks living in Greece. Whole villages were uprooted, took with them whatever they could carry and boarded boats and trains bound for mainland Greece.
Smyrna, a prosperous city with a large Greek population was burned to the ground and most of the Greek inhabitants were killed. Greece was presented with the problem of housing half a million destitute and traumatised people. Initially the refugees were taken to various holding areas from which they were dispatched to every corner of Greece to start a new life.
As a solution to the problem the Greek government decided to appeal to the Monasteries of Mount Athos to donate land for the purpose of helping the refugees. The Vatopedi Monastery donated all of Ouranoupolis and also the entire island of Ammouliani which is located directly across.

The first refugees arrived in 1922. They were from Caesarea, former merchants and carpet weavers.

They initially moved into the donated monastic buildings and used them as communal living quarters until the first houses were built.

More refugees arrived every subsequent year until 1928 and gradually a small village of 90 cottages was formed. 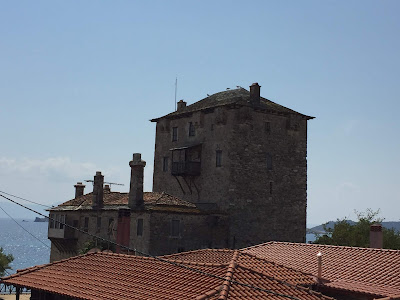 Those later refugees were from the Princes Islands in the Propontis, former prosperous fishermen.
The village was initially named Prosforion and was attached to the town of Ierissos.
In 1946 the village’s name was changed to Ouranoupolis, a reference to the ancient town and it became a village in it's own right.
The first refugee houses, white-washed, red tiled, one bedroom single story houses with small gardens were built.
To help the refugees each family was given a cottage, a plot of land to cultivate, some olive trees and ten sheep which died soon after from starvation and were replaced by more resolute goats.
Fishermen were given a grant to buy a boat. Living was harsh because fresh water was scarce and the dry land produced very little.
The only available source of employment was on Mount Athos. The men of the village would enter Mount Athos for many months, where they worked as labourers in order to provide for their families.

It was a harsh place for anyone to settle in, more suited to monasticism than the establishment of a village. The waterless land was decaying granite, heavily covered with thick vegetation.
In the early days of inhabitance, the village was isolated from the rest of Halkidiki because there was no road by land due to an old law from the village’s monastic past that prohibited roads by land to be constructed. The only access to the village was via boat or via an old goat track.
In 1959 the first road to the village was constructed by the villagers. Soon after the road was constructed properly and a daily bus service was established.

This brought the first tourists a trend that gradually lifted the village out of poverty and into a more prosperous future as a tourist resort. 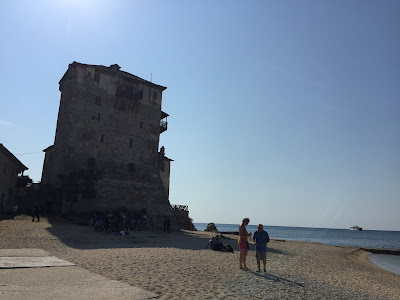 Today, Ouranoupolis is a bustling village, heavily visited in the summer months by Tourists from the world over, and visited by pilgrims all year that are entering Mount Athos.
Its main street has a variety of shops catering to the pilgrims the tourists and the locals alike. The tavernas offer great food and you can pick up great souvenirs from the many tourist shops.
Although it is a busy place, the architecture of the village and its original charm, still manage to enchant each person that comes to spend time in Ouranoupolis.
Next time, a more detailed look at the Prosforion tower and its connection to Australia.
at October 16, 2019 3 comments: 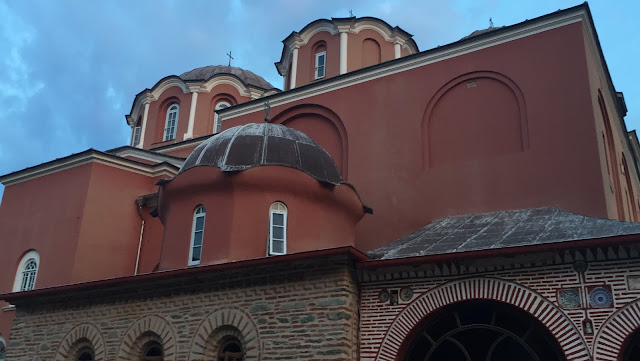 Upon my visit to the Holy Monastery of Iveron last year to partake in the great feast of The Dormition of Our Lady, I had the distinct pleasure of chatting with Elder Epiphanios of The Holy Cell of Milopotamos.


The all night vigil is long and between liturgical commitments I set aside some time to seek out Elder Epiphanios. 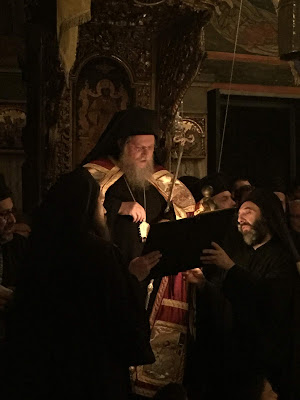 It didn't take long to find him, on my first walk to the back entrance to the kitchen, there he was, taking a much needed rest from the hot fire. 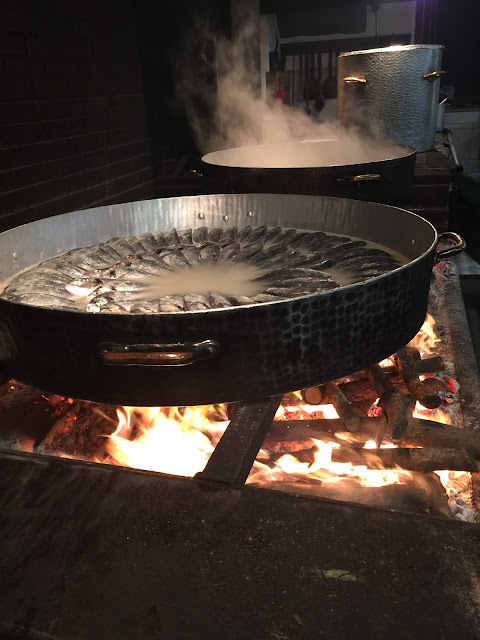 We spent some time together, chatting about Australia and the Holy Mountain, food and wine also. 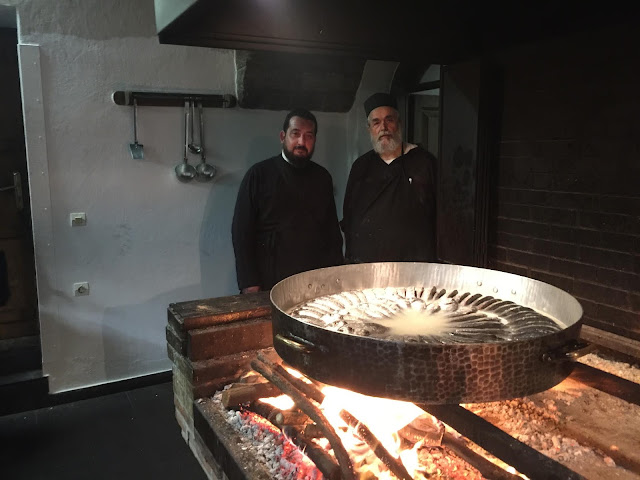 It was a blessing to have spent some time with Elder Epiphanios after so many years.
at June 20, 2019 2 comments: