0054 - The miraculous Icon of Panagia Paramythia - Holy Monastery of Vatopedi 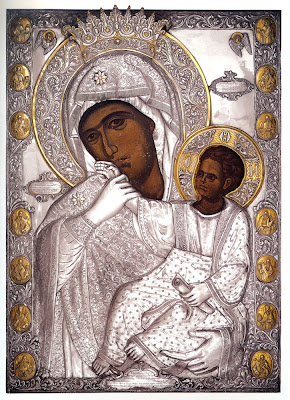 The miraculous Icon of Our Lady, Panagia Paramythia is to be found on the wall of the right hand choir in the chapel that bears the Icon's name. This Icon has been removed from a wall painting in the exonarthex of the katholikon of the Monastery, and is dated by tradition to the 14th century. The Icon's appearance and miraculous tradition comes from the following tradition as told by the fathers of the Monastery. 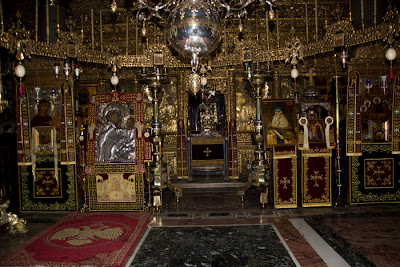 On January the 21st sometime in the 14th century, after the Orthros service was completed, the fathers were on their way to their cells to rest prior to beginning the days tasks. It was at that time that the gates of the Monastery would be opened for the day. They were unaware that the Monastery was surrounded by pirates waiting for the Monastery's doors to open in order for them to plunder its treasures.
The Abbot of the Monastery remained in the katholikon deep in prayer as was his usual routine. 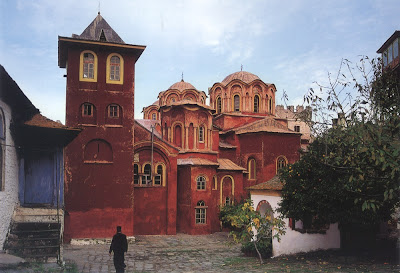 He was startled suddenly after hearing a voice that did not sound human. Filled with fear he looked around but not see anyone, no one was there. He concentrated to see where the voice was coming from and to his surprise he was drawn to the Icon of Our Lady in the exonarthex, which he fearfully approached. He listened closely to the voice coming from the Icon and heard Our Lady say "Do not open the Monastery's gate today, but go to the walls and get rid of the pirates" He gazed at the Icon and saw the most surprising miracle.
Our Lady's image was alive. Christ the child (as depicted in the Icon) also was alive. Christ raised his right arm to cover Panagia's mouth and gazed at Her with a very strict facial expression. He then heard Christ speak in a sweet child like voice "Don't Mother, don't tell them. Let them be punished as they deserve because they do not keep their monastic duties." Then Our Lady with care lifted Christ's hand and moved Her face gently to the right, repeated her advice for the second time "Do not open the doors of the Monastery today, go to the walls and rid the Monastery of the pirates, and be sure to repent because my Son is angry with you". She repeated the same words a third time and suddenly Their images became an Icon once again.
The Abbot who was full of amazement, gathered all of the fathers quickly and described the events to them in detail. The fathers all went to the Icon and were all amazed! The Icon had changed! It looked nothing like it was originally. The Icon remained as it can be seen today, with Our Lady's hand restraining Christ's hand from Her mouth, Her face slightly facing to the right trying to release Her mouth to talk and has a calm and motherly expression on Her face. Christ's hand attempts to cover His Mother's mouth and His facial expression is stern and strict.
This Icon is not made by human hands (αχειροποίητος) because it depicts an image that was not painted by human hands but by the Grace of God.
The monks to this day out of gratitude toward Our Lady, burn a perpetual flame before the Icon and a supplication service is conducted before the Icon daily. 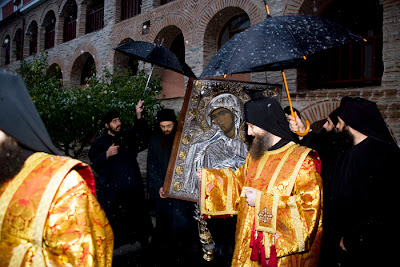