Upon closer inspection of the telegraph, I discovered that it contains details of Mount Athos as seen by the author of the telegram whilst on a pilgrimage. 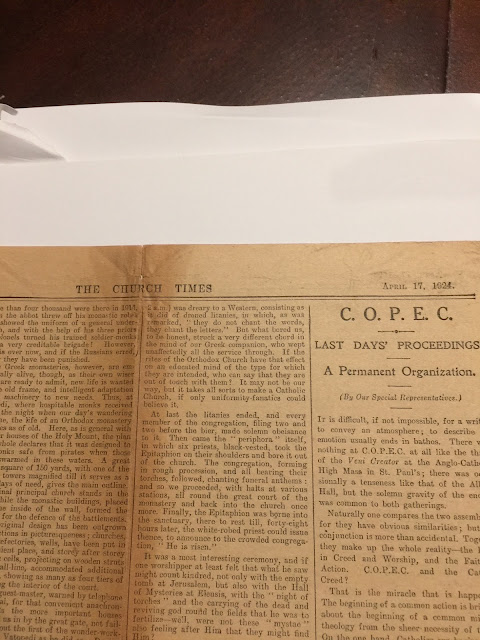 The Article is titled Holy Week on Mount Athos - In a self governing Church State.
Instead of photographing the entire article, I will re-write it to make it easier for you to read.
I will do this over the course of the next few posts.

Nowhere on earth, we suppose, does there exist such a museum of ninth-century architecture, institutions, and thought as can be found on the "Holy Mountain," a place which is reasonably hard of access even in these days of easy transport, but which receives every visitor with a welcome.
One thing only does it ask of him, that while there he shall leave the twentieth century behind him, and breathe a medieval atmosphere awhile, and be content. Let him see nothing ludicrous in ikons that talk, that turn out intruders, and take a summary vengeance on the profane. Let him come a-pilgriming, as his fathers did to Canterbury and Our Lady of Walsinghame, and all that the mountain has of ancient charms his to command.

At least it was in this spirit that a party of six, British officers for the most part, but including one Padre and one Greek in the number, made their way on a tiny Greek steamer from Salonikato the harbour of the mountain, in the Orthodox Holy Week of 1923.

Athos, it may be well to say at once-for even the old residents in Greece are not always clear upon the subject - is not one monastery, but a little self-governingChurch State; ruled, now that it is part of Greece, by the same constitution as in the days before the Turk came; though be it recorded to the Turk's credit that he never departed from his old promise to respect its freedom. A hill peninsula some twenty miles long, the long ridge of which rises at its southern end to a peak 6,000 fee, it shows as nothing else can what Greece was like in the days before she was so recklessly deforested. All its length is clothed with forests of oak, poplar and plane, with undergrowth of bay and ilex, and the giant white heather that here grows to a height of ten feet. Steams flow through every coombe to the sea, and dotted along its length, on sea-marge, in glen, on towering crag, are the monasteries succursales and hermitages that have stood here since the peninsula was a refuge from ninth-century Iconoclastic zeal, and which legend loves to refer back to Theodosius and Pulcheria.

As soon as may be after landing-and that is probably after a night spent at the nearest Monastery - the visitor must repair to the capital of the island there to report himself to the governing body, present his credentials, and exchange them for a passport that will enable him to wander at will among the monasteries, and claim hospitality and transport from each at need.
The body in question, the "Koinotes" consists of representatives of each one of the twenty old "houses" of the "island", but it acts through a committee of five, four of the members of which hold the the four quarters of the community seal, while the chairman keeps the frame into which they fit when needed for use.
A passport is readily given, and that secured, you may leave the little town, unique in the fact that it alone of all the towns has no woman in its boundary, and wander on at your will, from shrine to shrine. You pass over hills like those of Devon, though on a larger scale, and dotted like them with little white farm-like buildings, which are the "Kellia" where five or six monks live together, and serve tiny chapels bowered in immemorial cypresses. At times one encounters far larger monasteries, modern Russian erections that are theoretically "succursales" (sketai) of some one of the older houses, but which have actually been enlarged till they surpass the parent institution. Such an one is the Skete of St. Andrew (the Serai), close by Caryae itself, where a church of cathedral dimensions is merely the centre of a group of buildings that could house a university roomily, and now which is all but empty. Over a thousand monks, and more than that number dependants, were there when the building was completed in 1902. Some twenty poor peasants are now all that remain in its vast halls, working on the lands of the old hermitages as in the days before the Russians came. A melancholy picture of what we may imagine Fountains or Tintern to have been like, when Henry's work was just done.
So ends at leastaor the time, what has been, we fear, an effort to mix religion and politics. It cannot be denied that the Russians, in their efforts to increase their footing in this Mecca of Orthodox piety, and also to get a hold on so important strategic point as this peninsula, were not always too scrupulous in their methods. By their own promise, they were never to put more than fifty monks in the House of St. Panteleimon, that was ceded to them in the eighteenth century.