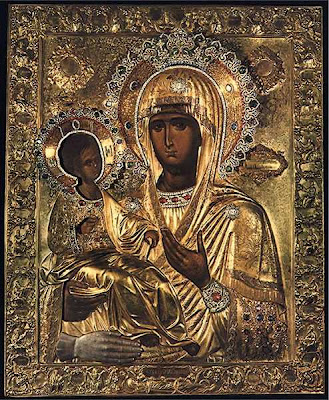 THE HOLY ICON OF PANAGIA TRIHEROUSA

The beautiful Icon of Panagia Tricherousa is kept at the Holy Monastery of Hilandariou on Mount Athos. It is an old Byzantine Icon of Holy Theotokos. The face of Panagia is life like and sweet which conjures emotions in the venerator and leaves you in awe of Her presence. The Icon for reasons of protection and showing of respect is covered with a golden riza on which are attached 5,000 precious stones, donated by centuries of faithful that have venerated the Holy Icon. 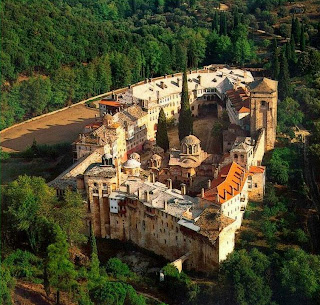 The Icon’s history:
The Miraculous Icon of Panagia Tricherousa belonged to the family of St. John Damascene and was always kept in the chapel inside the Saint’s home. St. John Damascene was the chief advisor of the Caliph Walid of Syria between the years of 705-715 A.D. for all matters concerning the Christian population of the Caliphate.
During this time period, in the reign of Leo the 3rd Byzantine Emperor of Constantinople, the heresy of Iconoclasm became prevalent. Emperor Leo the 3rd was a staunch opponent of Icons which he thought formed idolatry. St. John proved to be a great supporter of the use and veneration of Icons and with his many writings was one of the many Fathers that upheld the use of Holy Icons.  In an effort to silence St. John, Emperor Leo sent word to Caliph Walid of Syria, that St. John was conspiring to overthrow his rule in Syria. 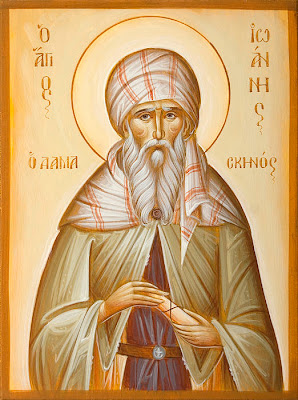 Once word was received, Caliph Walid immediately ordered St. John Damascene’s arrest and ordered that the Saint’s right hand be cut off in the main square of Damascus in the presence of the public. The Caliph’s order was immediately upheld and the Saint’s right hand was cut off. Saint John Damascene was then given his hand and sent away. Throughout the course of that night, St. John prayed unceasingly before the Holy Icon of Panagia Tricherousa in order for his hand to be healed so that he could continue his efforts against the heresy of iconoclasm.
During the course of the night, in immense pain, he fell asleep for a small period of time and had a vision of Panagia through the Icon before him telling him that from this time onwards your hand will be healed.
St. John awoke shaken from his vision, however immediately realised that His hand had been miraculously re-attached and his pain had subsided. To show his gratitude to the Icon, he had a silver plate in the likeness of His own hand made and attached it to the left hand bottom of the Icon of Panagia. This is how the Holy Icon was named Tricherousa (Three handed).
After this great miracle, St. John Damascene decided to leave the city and become a monk in the Holy Monastery or Lavra of St. Savva the Blessed in Palestine. 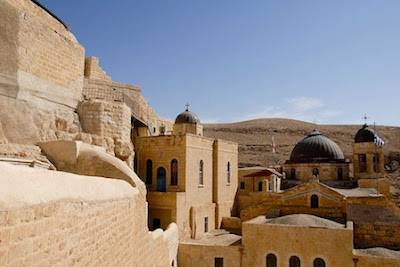 THE HOLY MONASTERY OF ST.SAVVAS PALESTINE

He took his much loved Icon of Panagia with him. In the year 1217 A.D. St. Savvas of Chilandariou Monastery, Son of the King of Serbia Stephan Nemania (after named Symeon) visited the Lavra of St. Savvas whilst on a pilgrimage. Whilst at the Monastery, he was gifted with the Icon of Panagia Galaktotrofousa (Milk Feeder) the Crossier (staff) of the founder of the Lavra and the Holy Icon of Panagia Tricherousa, which he took with Him to the Holy Monastery of Hilandariou of Mount Athos. The Holy Icon remained at the Monastery until the year of 1347. 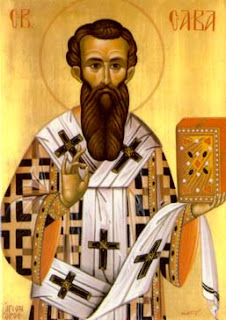 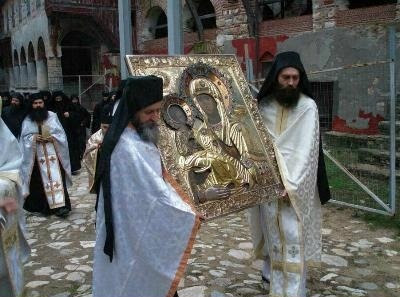 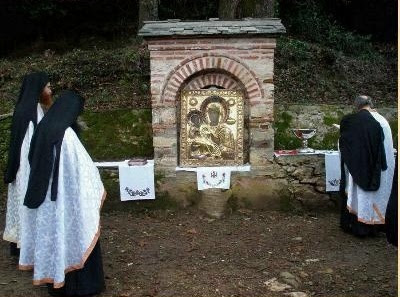 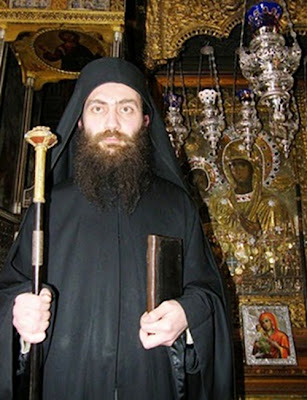 The Abbot of The Holy Monastery of Hilandariou.
at December 17, 2012 4 comments: