0058 – The Miraculous Icon of Panagia Pirovolithissa – Holy Monastery of Vatopedi 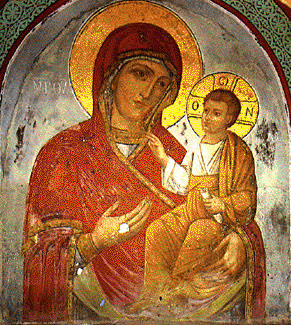 In 1822, a Turkish unit of soldiers arrived at the Vatopedi Monastery gates in order to rob the Monastery of its riches and destroy as much as they could. One soldier, who also happened to be the nephew of the officer leading the unit, dared to fire a shot at the Icon of Panagia which is painted on the wall directly above the entrance of the Holy Monastery. The shot hit the right hand of the Theotokos, the bullet mark is still visible to this day. 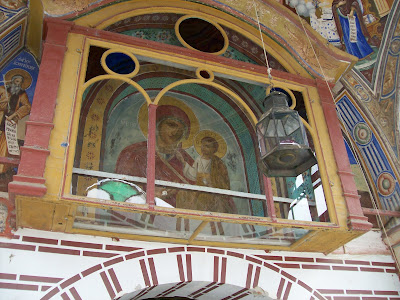 Immediately after he fired the shot, something came over him and he went insane. He hung himself on an olive tree opposite the Monastery gates. The officer of the Turkish unit, witnessing these events, was overcome with fear and concluded that what had happened was due to his nephew’s sacrilege. He ordered his body to be thrown away without a proper burial.
at July 30, 2012 No comments:

0057 – The Miraculous Icon of Panagia Pantanassa – Holy Monastery of Vatopedi. 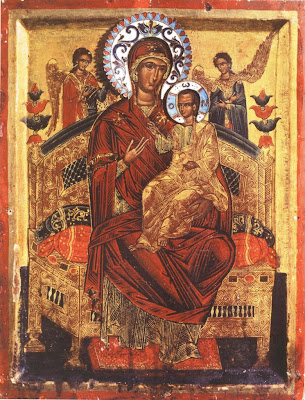 The Miraculous Icon of The Most Holy Theotokos, Panagia Pantanassa is a portable Icon dating back to the 17th century. It is placed at the left hand proskynitarion of the north eastern pillar in the Katholikon of the Holy Monastery.


One day a young man from Cyprus entered the Church and went to venerate the Holy Icon. At this point, Elder Joseph of Vatopedi+ saw a sharp light coming from the face of Panagia on the Icon and an unseen force dropped the young man to the ground. 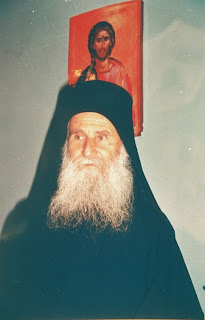 Once he came to his senses, he confessed that he lived a life of sin and was involved in dark magic. The miraculous action of Panagia Pantanassa made this young man change his ways and become a believer.


The Holy Icon also has the special Grace from God to heal people with cancer. There are many accounts from people across the world, which have been healed from their cancer after reciting the paraklesis service of Panagia Pantanassa.


Many more miracles have occurred recently in Russia after the request of the Moscow Patriarchate for two copies of the Holy Icon to be sent from the Holy Monastery. The first copy of the Holy Icon is at the Church of All Saints in Krasnoe Selo in Moscow and the second is at the Monastery of Christ’s Transfiguration in Novospaski. The most notable miracles have taken place at the centre for childrens oncology in central Moscow. 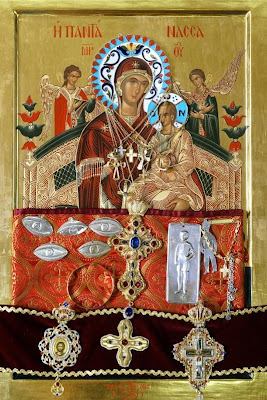 Photos and original text from vatopaidi.wordress.com
at July 30, 2012 1 comment:

0056 – The Miraculous Icon of Panagia Elaiovritissa – Holy Monastery of Vatopedi 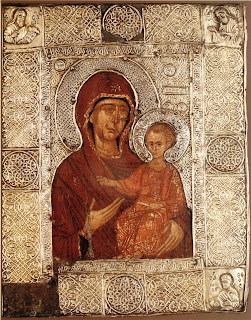 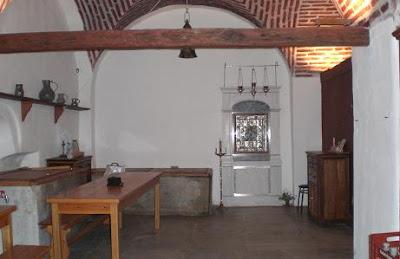 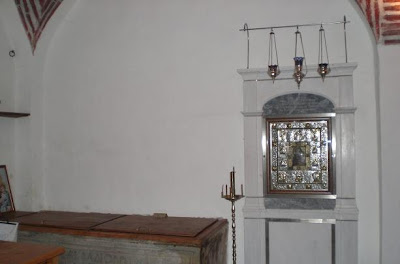 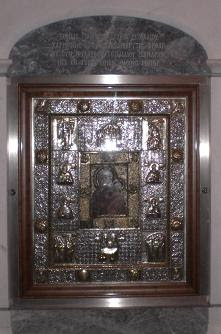 0055 – The Miraculous Icon of Panagia Esfagmeni – Holy Monastery of Vatopedi

The Miraculous Icon of Panagia Esfagmeni is a wall fresco dating to the 14th century and is located in the Narthex of the chapel of St. Demetrios which is adjacent and part of the structure of the Katholicon of the Holy Monastery. 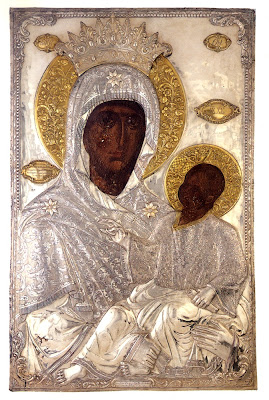 According to a manuscript dating to the 17th century which is titled “Proskinitarion of Vatopdedi” under the heading of “In reference to the Icon of The Esfagmeni” the following is written:
The then care taker of the Church who was a Hierodeacon, after a lengthy and tiring all night vigil which he was charged with undertaking all of the tasks of the Church (For those who have been to Mount Athos and experienced an all night Vigil, the church caretakers workload is enormous), he went to the refectory and asked from the monk in charge for a little bread and wine in order to quench his hunger. The monk in charge of the refectory refused him abruptly because everything had been cleaned and set away already. The Hierodeacon was enraged, he headed toward the Church holding a knife and was saying “I undertake all of this effort and duty for the Church and they cannot even set aside some bread for me to eat” Whilst muttering these words, the evil one took a hold of him, and he raised the knife whilst in front of the Icon of Panagia and stabbed the Icon on the right hand cheek next to Panagia’s eye. Once the blow was struck, a wound appeared on the Holy Icon as if it was alive and much blood flowed from the Icon. From this day, the Icon of Panagia was named Esfagmeni (the slain). Some of the blood from the Holy Icon sprayed into the Hierodeacon’s eyes, and from that moment on he was blinded. He then realised what he had done, he fell to the floor and whilst hitting his head on the marble floor was crying to himself saying “I am a murderer and now worthy of death”. 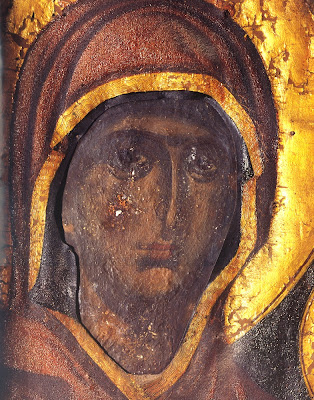 The Icon without its silver cover.

After some time had passed, the miracle was quickly realised by the rest of the Fathers of the Monastery and they all gathered to witness the blood coming from the wound on the Holy Icons face. The knife lay on the marble floor still coated with wet blood; there was a large pool of blood beneath the Icon, and the Hierodeacon who had committed the unholy act,  lay on the ground, speaking in incomprehensible words as a possessed person does. All of the Fathers were overtaken by fear. The Abbot of the Monastery at once instructed the Fathers to conduct an all night vigil to pray for the forgiveness of the Hierodeacon who had committed the crime. After many vigils, and some months had passed, the Holy Virgin appeared to the Abbot and told him the Hierodeacon’s sin was forgiven. From the moment the Abbot awoke from his vision, the Heirodeacon’s sight was restored.


The Hierodeacon, with his sight now restored sat opposite the Icon for three years crying and asking for forgiveness for his actions. One day he heard a voice from the Icon “Your sin has been forgiven, however, your bold hand shall remain black and lifeless for the rest of your life and its flesh will not dissolve after your repose”.  This in fact was the case, the Hierodeacon’s hand was lifeless and black while for the rest of his life. After his repose and his exhumation as is normal on Mount Athos, his hand was still black, and the flesh was undissolved. The fathers encased this hand in a glass case and placed it in a drawer beneath the Icon of Panagia, which he had struck. Ever since this miracle took place, a silver lamp was placed in front of the Icon, which always has an eternal flame.


Translated from the manuscript Codex 293 of the Holy Monastery of Vatopediou from the 17th Century.


I have been blessed to have the opportunity to venerate this Holy Icon in person at the Holy Monastery of Vatopediou. I have also seen the hand of the Hierodeacon which is blackened, its skin still in place and veins also visible. It is placed near the Icon. When you are there next, ask the caretaker monk who is giving you the tour of the Church to see it. He will be more than willing to show you. 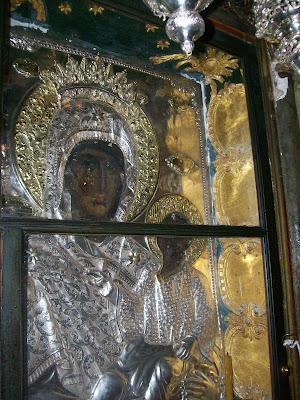