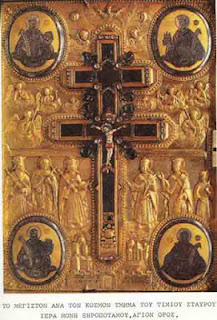 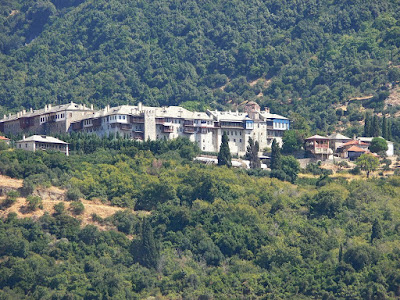 In the Catholicon (Main Church) of the Holy Monastery of Xeropotamou, 13 pieces of the True Cross of Jesus Christ are treasured, 4 large pieces in ancient reliquaries and 9 smaller pieces which are also housed in reliquaries with other Relics of Saints. 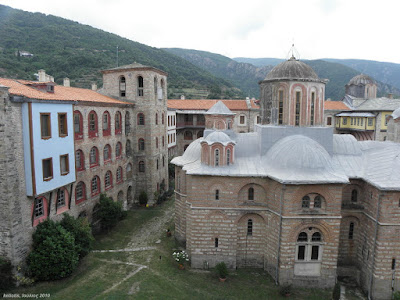 It is quite likely that all of these pieces of The True Cross were originally one large and unique piece, most likely of the piece that was donated to the Monastery by the Eastern Roman Emperor (Byzantine) Romanos 1st Lekapinos.

The First and largest of these pieces is considered to be the largest piece of the True Cross of Christ in the world, and at the lower section of it, one of the holes that was created by the nails that pierced Christ’s Holy Body can be seen. 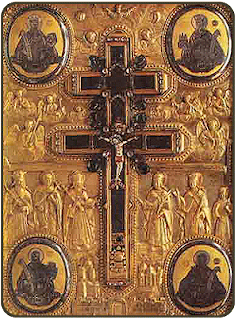 It has the shape of a Cross and is encased in a pure gold inner casing which has been designed in order to display the entire piece of the True Cross. It has a length of 31cm and at its widest part it is 16cm wide. The entire piece weighs 320 grams. 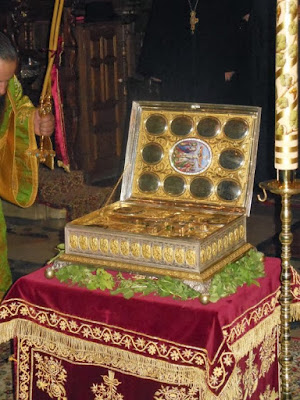 The second largest piece of the True Cross of Christ which is kept at the Holy Monastery, also has the shape of a Cross and is encased almost entirely in gold except for a small section which is left open to be venerated by the faithful. This is the piece that is taken out of Mount Athos, when requested by various Metropolises and cities outside of Mount Athos. 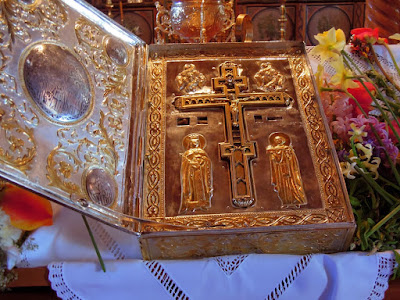 We are all aware of the myriads of miracles that are attributed to the True Cross of Our Lord, however, this piece of the True Cross has a miraculous characteristic, it exudes a faint fragrance which is not anything like a natural or made perfume. This is witnessed by the majority of the faithful that have the opportunity to venerate It.

The reliquary in which the second piece is housed also has small piece of the Holy relics of the 40 Martyrs and the relic of St. Modest Archbishop of Jerusalem the Martyr who is considered the protector of animal farmers.

Every year on Palm Sunday, thousands of people gather in the village of Petrokerasa in Greece to welcome the Holy Cross of The Monastery of Xeropotamou. The welcoming ceremony is a momentous event organised with Ecclesiastical grandeur and spirituality. The journey, welcoming ceremony and hosting of the True Cross of the Holy Monastery of Xeropotamou occurs every year without fail to this village from the year 1768 and probably even longer every Palm Sunday. 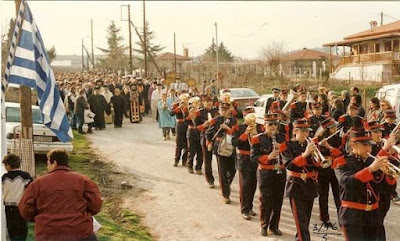 This ancient tradition, in which the Fathers of The Holy Monastery keep true to, is done in the same manner and tradition which has been handed down and historically documented since 1768.
This is due to a great miracle that occurred in the 18th century in this village. The village was plagued by a deadly disease which was affecting all of the inhabitants. The Holy Monastery of Xeropotamou was contacted by the villagers in order to bring the True Cross to the Village in order to bless it. The Fathers, immediately after receiving word, and with great honours and a Grand procession, brought the piece of The True Cross to the village and upon Its procession around the village, the village was saved and the disease that plagued its inhabitants was eradicated in miraculous circumstances due to the presence of the True Cross. 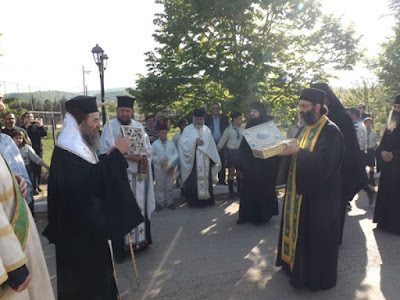 In memory of this great miracle, the True Cross of the Holy Monastery of Xeropotamou Mount Athos is taken to the same village every year to be venerated by the villagers and faithful.

Photos and original Greek text courtesy of http://agioritikesmnimes.blogspot.com.au
at August 25, 2015 No comments: