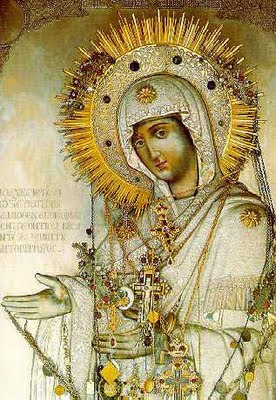 The Holy and miraculous Icon of Panagia Gerontissa is located at the Holy Monastery of Pantokratoros, Mount Athos and is the Monastery’s most valued possession.

Tradition states that the Icon was donated to the Monastery by the Roman (Byzantine) Emperor Alexios Komninos the 1st.  It is a copy of the mosaic Icon of Panagia which was located at the Pantocratoros Monastery in Constantinople, which was built by the same emperor. 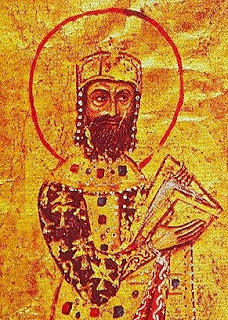 It is the only ancient Icon on Mount Athos that depicts the Theotokos in full and in a prayer pose (Deisis).

The first miracle attributed to the Icon dates back to the time of emperor Alexios Komninos the 1st, when he instructed that the Monastery be built 500 metres from where it stands on a rise where the current chapel of St. Athanasius of Alexandria stands.
During construction, every evening after the workers had departed the building site, their tools and the Icon would disappear from the current site and re-appear 500 metres away at the current site of the Monastery. This happened many times until the emperor came to the realization that the Icon of Panagia Gerontissa wanted the monastery in the location It was showing. As a result, the Monastery was built in its current location. 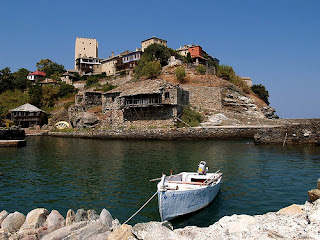 The Holy Icon’s original position was in the sanctuary behind the altar table. One day the Abbot of the Monastery who was very old, ill and frail, realizing that his death was near, asked the presiding Priest serving the liturgy, to speed up the Liturgy as he wanted to take Communion before he passed away. The presiding Priest did not listen to the Abbots request. 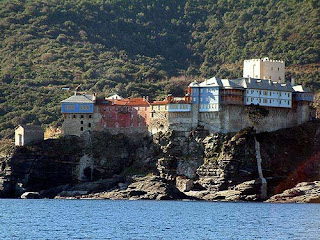 Then miraculously, Panagia, speaking through Her Holy Icon, commanded the Priest to speed up the liturgy.  The Priest, immediately obeyed, and shortly after the old and frail Abbot took Holy Communion, he passed away. This is why the Holy Icon was named Gerontissa, due to its relationship with the then Geronta (Abbot) of the Monastery. The Hoy Icon of Panagia Gerontissa was then placed outside of the sanctuary and on the left hand side marble pole of the main church, where it remains to this day. 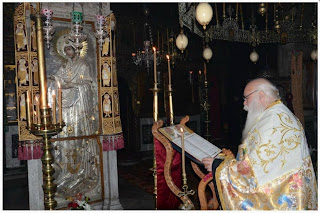 The Holy Icon was covered in an all silver oklad (cover) with the donations of a noble woman of Constantinople.
The amphora (water jug) that appears carved on the silver cover, was depicted in order to commemorate another miracle performed by the Holy Icon in the 17th century. The Monastery was short of oil for its daily use, and its monks decided to leave the Monastery in favour of other Monasteries that had all they needed. 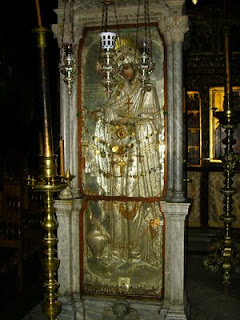 The Abbot of the time appealed to the monks to trust in the providence of Panagia Gerontissa, and he prayed with all his heart for Panagia to provide for her Monastery. Some days later, one of the remaining monks saw oil coming out from under the door where the oil was kept. He opened the door and seen that the large oil container was so full that the oil was spilling from it onto the floor. From that time onwards and for the next 300 years, the monastery has never been out of oil.
Another miracle attributed to the Holy Icon of Panagia Gerontissa dates back to the evening of December the 1st 1948, when fire surrounded the Monastery, however the Monastery remained without any damage.

The Holy Icon of Panagia Gerontissa was placed inside a custom stand made of marble which was donated by the former Abbot of the Monastery Theofilos of Limnos. In 1997, the Icon was removed from the marble stand after 200 years under the supervision of the Archaeological institute. After months of tests and carbon dating the Holy Icon was confirmed to be from the 11th century, precisely in the reign of the Emperor Alexios Komnenos the 1st. 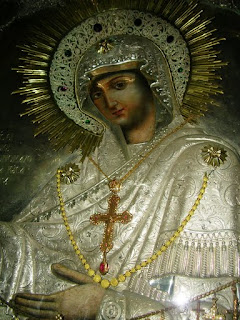 The Icon in its current form was altered when the silver oklad (cover, poukamison) was added in the 19th century. It was crafted in St. Petersburg and is of priceless value. The face of Panagia and Her hands were repainted in order to match with the new silver cover. The archaeologists have discovered fragments of the original painting also.

Many miracles are attributed to the Holy Icon of Panagia Gerontissa, which is clearly visible due to the amount of gifts that have been left before the Icon.

Panagia’s face as depicted on the Holy Icon of Panagia Gerontissa, has a sweet and merciful expression leaving every pilgrim with a sense of happiness, hope and comfort. 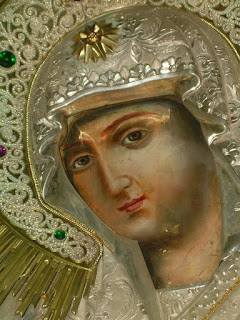