By Rev Fr Chris Flesoras
The long-haul portion of our trip abroad is over: we’ve made it to Munich, and after eleven hours crammed into the steerage section of a Lufthansa Airbus 340, the ability to walk about and breathe fresh air is sweet indeed.  The first time I flew Lufthansa, four years ago, it seemed like the air carrier of my dreams: it was at the end of a month of air travel within Africa, from South African Airways at best—the equal of any Western airline—to RwandAir and Zambian National at worst, with Kenya Airways and Ethiopian somewhere in between.  Boarding the Addis Ababa-Cairo-Frankfurt flight, on a Lufthansa 747, was like reentering civilization.  No one was fighting for seats, there were no mosquitos in the cabin, and there was no visible material decay on the aircraft.  I fell in love with Lufthansa right then—not for taking me away from Africa, which I love (and would twice return to), but for reminding me that air travel need not be an exercise in dubious mechanics and exceptional danger. 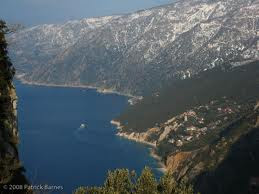 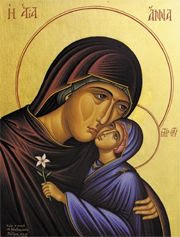 The relics came, and the relics went; and then the culmination of the vigil began as daylight advanced across the craggy Mountain—the Divine Liturgy.  I took Communion, and then I went to the miraculous icon of Saint Anna.  Kneeling before the photographs of infants from across the world, I sought her help.  Then I went to the bishop for his blessing with the hundreds of other faithful.  Then, as the exodus from the chapel began, I lingered for a bit.  I walked over to the relic of Saint Anna.  I leaned over to have a final look.  And it smelled like the sweetest honey.
As originally published on http://saintanna.org/blog/entry/pilgrimage-to-the-skete-of-st.-anna-by-joshua-trevino-2007/
at August 09, 2010