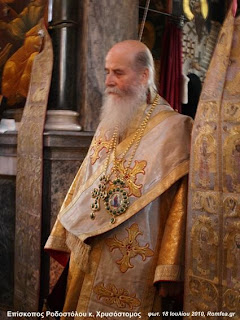 His Grace, Bishop Chrysostomos of Rodostolou, is the most modest bishop I have met. I first met his Grace when I was a student at Athonias Ecclesiastical Academy at Mount Athos. I was then a first year student and his Grace had retired as principal of the academy, however, always stayed at the Academy when visiting Karyes.
He was always polite, humble and modest, never wore an engolpion unless it was a formal ceremony and was always quiet, yet stern and strict when it came to our behaviour and church acumen. He is much loved on all of Mount Athos and currently resides at the Holy Monastery of Great Lavra. He is also the Ecumenical Patriarch's representative on the Holy Mountain.
His Grace (worldly name: Panagiotis Anagnostopoulos of Nicholas and Stavroula) was born in Serres Greece in 1933. In 1950 he came to Mount Athos and was tonsured a monk. After his graduation from Athonias Ecclesiastical Academy, he served as the secretary of the Holy Community of Mount Athos. He studied Theology at the Holy Theological college of Halki (1958 - 1962). 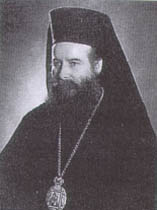 He was ordained Deacon at the Holy Monastery of Great Lavra in 1960 and then Priest in 1965 by the then Metropolitan of Militoupolis Nathanael, the then principal of the Athonias Academy (Later Metropolitan of Kos). He served as a teacher at the Athonias Academy from 1963 - 1967 and later by decision of the Ecumenical Patriarchate was promoted to principal of the academy of which he remained as principal until 1988. In 1978, he was popularly elected by the Holy Synod as titular Bishop of Rodostolou. He remains at Mount Athos to this day acting as the Ecumenical Patriarch's helper and conducting Bishop duties on His behalf.
His name day is on the 13th of November (old calendar). 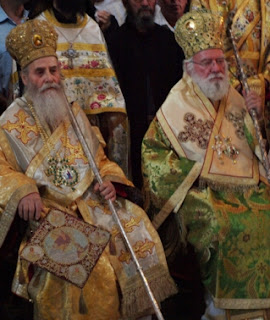 His Grace at last year's feast day of St. Athanasios the Athonite 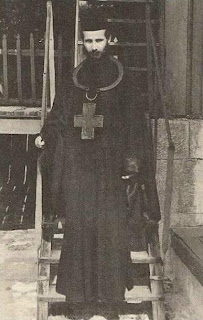 His Grace wearing the cross of St. Athanasios the Athonite 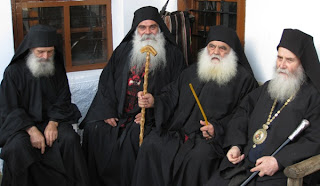 His Grace after officiating at an Athonite funeral.
His Grace Chrysostomos has written many books over the years, all in Greek. I do not know of any translations into english, however will post if I do find. I own nearly all of his books and for those who can read Greek, I strongly suggest you buy and read them.
Below is a photo of most of His Grace's books. 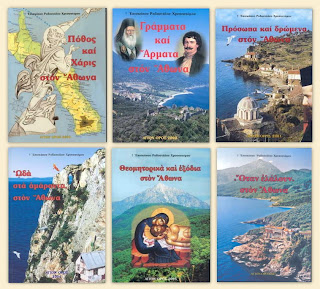