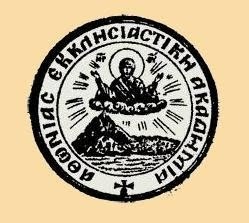 The Seal of Athonias Ecclesiastical Academy.

On the Holy Mountain, over various periods many schools operated with the name "Athonias School". In the Holy Monastery of Megisti Lavra, Saint Athanasios the Athonite is the first to create a school. Until this day the monks of Lavra Monastery call the area of the Monastery where the classes were held, "school".
However, the first well organised school, according to information contained in manuscripts, is established during the period of the 13th century at the height of the literary and artistic movement of the Paleologian period. It was based at the Holy Kellion of St. John the Theologian and was named "Theological School of Iveron"«Ιβηριτική  Θεολογική σχολή». All classes and subjects were taught in Greek.
In the 17th century, we see an intense effort by papists to establish a school and a monastery on Mount Athos. Our Holy and Great Church of Christ managed to avoid the pressure and with many efforts eventually distanced the threat of the papists.
In 1749 the fathers of Vatopediou Monastery with the many efforts of the former Abbot Meletios with the exhortations of The Patriarch of Constantinople Gregorios the 5th (1748-1751,1752-1757), the Patriarch issues a decree leading the establishment of a school close to the Holy Monastery of Vatopediou which was later named by Eugenios Voulgaris "Athonias Ecclesiastical Academy". 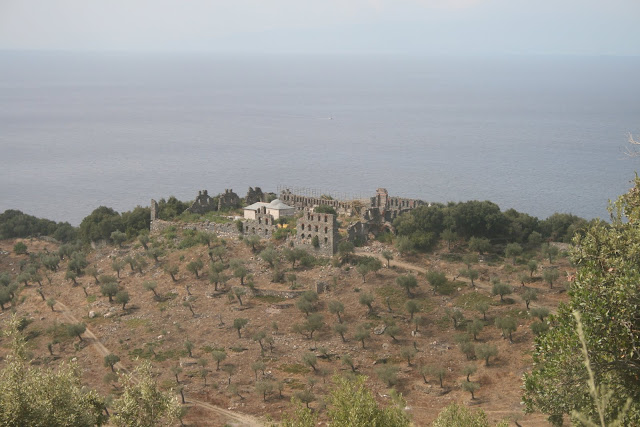 The ruins of the Athonias Academy built in 1749.

The first appointed dean is Hierodeacon Neophytos Kafsokalivitis and he leads the academy for 3 years. After his resignation, the Ecumenical Patriarchate appoints Archimandrite of the Holy Sepulchre Agapios who on his way to take up his new post, was slaughtered by the turks on the 18 of August 1752 in Thermi, just outside of Thessaloniki. The group of Holy Martyrs of the Academy has begun.
The Mother Church having a tireless interest in the newly established school of Athos, appoints by decree in the spring of 1753 the "wisest of the Greeks in the turkish conquest centuries" Hierodeacon Evgenios Voulgaris. 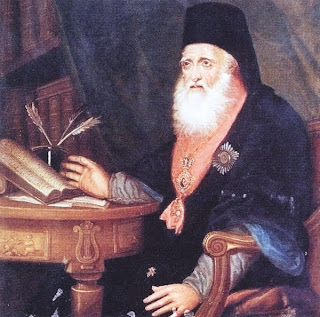 Eugenios Voulgaris 1716 - 1806.
During his deanship Athonias is named "Athonias Ecclesiastical Academy" the title it has retained until present day. During this period the Academy has its glory days it draws many students and gains fame not only in the Orthodox world but to much of Europe and beyond. Many students came to the Academy in order to be taught by the great teacher, Evgenios Voulgaris.
Amongst those students, most notable is the equal to the Apostles, Saint Kosmas of Aetolia, Anthimos of Olympus, Iosypos Misiodakas, Sergios Makarios, Christophoros Prodromitis, Saint Athanasios Parios, Damascenos Metropolitan of Thessaloniki, Paisios Kafsokalivitis, John Pezaros and Dionysios Platamonos.  In addition to these students the following were also very notable students: St. Athanasios Koulakiotis, St. Cyrillos Papadopoulos the founder of the Holy Monastery "Megalou Dendrou" in Paros, the first dean of the Chalki Theological Seminary Metropolitan Constantine Tipaldos of Stavropoulis, the first dean of the Seminary established by Kapodistrias on the island of Poros, Prokopios Dendrinos and teacher of the same seminary, Benedictos.
The Ecumenical Patriarchate after the departure of Evgenios Voulgaris, made enormous efforts for the maintenance and upkeep of the academy. It appointed teachers and deans and with fundraising efforts it maintained the academy with care.
In 1771 it invites graduate of he academy, Saint Athanasios Parios to be dean. Most notable teachers in the period prior to 1821 were Hierodeacon Kyprianos of Cyprus, who later was elected Patriarch of Alexandria, Nicholaos Zerzoulis, Saint Athanasios Parios, John Pezaros and others.
The spiritual guide of Athoniada in this period was the former Metropolitan of Corinth Saint Makarios Notaras, who was living at Mount Athos during this period. 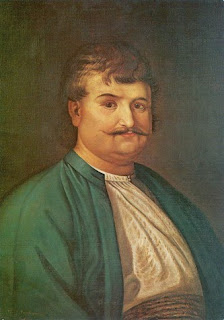 Regas Ferreos 1757 - 1798
It would be an enormous oversight if we did not mention as a student the great martyr for the Greek Nation and forerunner for the Greek Revolution Rigas Ferreos, who's contribution has been recognised over the century and a half as priceless.
On the 1st of June 1801, year of Patriarch Neophytos 7th (1789-94/1798-1801) the former Metroplitan of Trikkis Ambrosios, Monk Christopher Prodromitis (graduate of the academy) and Saint Nikodemos the Hagiorite are appointed administrators of the Academy. Adamantios Korais even though in France, is also appointed in order to reorganise the Academy due to the crisis which is beginning to be felt due to the difficulties of the period.
It is also important to mention that with a decision made by the Ecumenical Patriarch Neophytos 7th former Patriarch Gregorios the 5th is appointed as the Ecumenical Patriarchate's specialist exarch to the academy. His contributions turn out to be priceless. 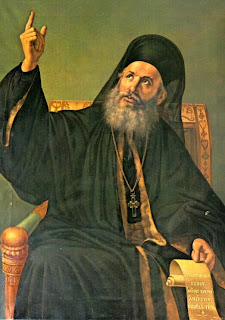